Decisions taken in companies are often group-based, although occasionally teamwork by experts produces disappointing results. To explain why this happens, Irving Janis created groupthink theory. And this become a universal but false alibi for bad group decisions. We have to look elsewhere for the causes of poor decision-taking in teams. But where exactly?

The hybrid model of work forced on people by the Covid-19 pandemic has led to employees working together less often. This problem is particularly acute in Poland, where cooperation is understood as being the same as the process of building social relations. With the increased proportion of remote work, creating relationships and new touchpoints between people in an organization is now even more difficult, as has been confirmed in analyses published in Nature. So how do we cope with taking decisions in groups in such a situation?

An excuse for wrong decisions taken by a group

Googling the term “groupthink” gave almost 8 million (!) results . In 1972 Irving Janis attempted to explain what led to the Americans’ decision – with its tragic consequences – to invade the Bay of Pigs. A group of experts appointed and led by John Kennedy concluded that sending Cuban mercenaries with the support of American armed forces would enable the toppling of Fidel Castro’s dictatorship.

The operation was doomed to fail, which some of the experts involved in the decision process knew. However, they remained silent, and the attack went ahead and ended in a fiasco. Why was such a disastrous decision taken, despite certain members of the group having sufficient information to oppose it? What causes competent specialists functioning in a group to take decisions that are not beneficial for the team or the organization?

Group members and their goals

Irving is a specialist in the field of taking individual decisions, but is not an expert on group processes. In his arguments, he neglected the fundamental properties of group action (Wekselberg, Groupthink: A triple fiasco in social psychology, 1997). According to Wekselberg, groupthink theory has no justification and cannot be used to explain erroneous decisions taken by groups. A fundamental stage missed by Irving in his analysis of the decision process in a group is investigation of the individual goals juxtaposed with the team goals. It is largely the goals and their interrelationships that contribute to the results of the group’s activities.

What were the different members of Kennedy’s teams aiming for? Did the ultimate success of the operation truly matter to them? Perhaps there were many people in the group who wanted to achieve other goals? Perhaps they saw value in focusing on their own careers, for which they were prepared to sacrifice the campaign thereby leading to its failure? Maybe they preferred to remain silent and not block the decision to invade for fear of losing their rank at the time?

A prerequisite for good group decisions

In order for group decisions to bring value to the organization, we have to be certain that the goals of the individuals are aligned with the goals of the group they are part of. A sales manager cannot aim to fill salespeople’s calendars with meetings when they don’t want them because they have to work on closing a previous project. The same rule applies to cooperation between teams within an organization. Marketing should not strive to deliver as many orders as possible when the goal in production is to reduce demand due to insufficient manufacturing capacity.

Is a given group the right one for taking decisions in a particular matter? Are the goals of the team members aligned with the group’s goals? If we cannot describe the group as meeting this criterion, there is a big risk of the results of its activities not serving the goals of the organization, and the group decisions will therefore be of low value. Crucial to the success of a group’s activity is the convergence of its members’ goals. Once this condition has been met, we can analyse the members’ knowledge of one another and their attitudes. Only then is it possible to achieve the group goals

Goals: why the taboo?

The concept of “good cooperation” is frequently misunderstood as “good relations” in Poland. This is one of the reasons why organizational goals are so rarely discussed. Not having them defined means that achieving success in a group’s work is problematic. Targets, i.e. business goals given in numbers, predominate, while the organizational goals needed to achieve them remain undefined.

1. General goal – to improve the quality of sales.

2. Detailed goals – to improve the sales system, to match advisors better, to improve consultants’ training, to improve how the exchange of information between sales and marketing is organised.

What can be done for groups to take good decisions?

A prerequisite for taking good group decisions is analysis of the group’s goals juxtaposed with the individual goals. Using groupthink to explain wrong decisions is just an excuse. The cause of failure in group decision-taking lies elsewhere. If the goals of a team’s individual members are aligned with the goals for which the group was put together, then the fundamental condition for achieving success has been met.

Because both group and individual goals are subject to change, it is good practice not only to measure goal convergence point by point, but also to regularly monitor the entire organization. A company is in a state of constant change. Change is taking place in the quality of coordination of actions, in relations on numerous levels, in communication; it is happening in practically all the processes that make up the organization. The systematic gathering of information from an organization and its analysis significantly increases the accuracy of the decisions taken in the company. 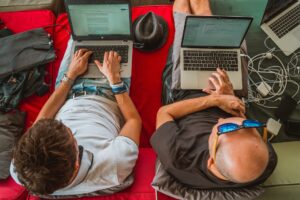 How to ensure that hybrid work is effective in your organization?

The outbreak of the Covid-19 pandemic in China towards the end of 2019, and the worldwide spread of the virus in 2020, forced changes in companies’ operati...

How to enhance the quality of decisions taken in teams?

Decisions taken in companies are often group-based, although occasionally teamwork by experts produces disappointing results. To explain why this happens, ...

How to make more than a 7-fold reduction in the risk of valuable employees saying goodbye?

When an employee leaves, the organization loses the benefits of their knowledge and experience, and their relations with customers, colleagues and for exam...